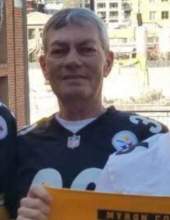 Gregg Lauerman
A celebration of life come and go memorial service for longtime Lamar resident, Gregg Lauerman will be held at 4:00PM on Saturday, June 1, 2019 at the Lamar Eagle's.
Gregg Lauerman was born in Salina, Kansas, February 24, 1956. He was raised by his grandparents Ray and Ferol Lauerman in Pittsburgh, PA. Gregg attended schools in the Mount Lebanon area and enlisted in the US Army in 1974 in the transportation division. He was stationed at Ft Campbell, Kentucky where he met his wife of 42 years, Judy. Son Clayton was born in Kentucky in 1978. Soon after he was born, Judy was discharged from the Army they relocated from Tennessee to Golden, Colorado the same year. Daughter Beverly was born in Denver in 1980 and the family moved to Lamar, CO shortly after.

Gregg was a plumber his entire adulthood. He worked with Lamar Heating and Plumbing, Ebbies Plumbing and C & L Heat & Air. He took great pride in his workmanship with the attitude that "If it’s not good enough for my house, it not good enough". He was also known to respond jokingly with "2 weeks, give me 2 weeks" when a timeframe was asked about anything, work related or otherwise.

Gregg loved his Pittsburgh Steelers and converted the entire family to Steelers fans. He also loved any form of racing, but specifically NASCAR and attending races in Phoenix. He played and watched golf every chance he could. He was also the chef in the home and watched more cooking shows than anyone should. He loved showing off his cooking skills in the kitchen or outdoors on the grill.

Gregg loved his family and bragged on his kids whenever he could. He was blessed with 3 grandkids, Joseph (JT), Jazlynn, and Jordon. He knew without a doubt these were the best, smartest, cutest, and most well-behaved kids on the face of the earth. He was so proud of each of them.

He is survived by his wife Judy of the family home; children Clay Lauerman of Denver and Beverly Lauerman of Littleton. Gregg is also survived by his grandchildren, Joseph, Jazlynn and Jordon Heredia as well as his step mother Lee Lauerman of Bethel Park, PA. Also surviving are his brother-in-law’s Kenny Claybrook of Lamar and Jim (Lisa) Claybrook of Blackfoot, ID as well as numerous family and a host of friends.
Memorial Contributions may be made to the Gregg Lauerman Memorial Fund in care of the funeral home office.
Arrangements are under the direction of the Peacock Funeral Home.
To order memorial trees or send flowers to the family in memory of Gregg A Lauerman, please visit our flower store.