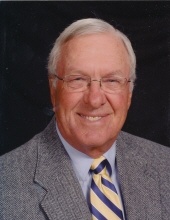 A service of celebration for longtime Lamar resident and dentist, Gilbert L. “Gib” Sprout will be held at the Lamar First Baptist Church on November 29, 2021 at 10:00AM with Pastor Paul Floyd of the High Plains Fellowship Church officiating. A private family interment will follow at Fairmount Cemetery.

Gilbert Lee Sprout was born to Miriam and George Sprout on August 15, 1939 in Lamar, Colorado. “Gibby” grew up in “The Best Small Town in America” and loved baseball. When he was 11, polio struck many children his age and he was one of them. Hospitals were crowded, but the ambulance driver said he would not return from Denver until he got a room! He spent over a year at Children’s Hospital, part of it in an iron lung. He rooted for his beloved Boston Red Sox and always treasured their autographed baseball. Following years of physical therapy, much of it administered by his mother, he learned to walk again and became an active student, serving as Head Boy in High School and attending Boys State. He enjoyed playing golf and softball in his spare time.

He attended the University of Nebraska and the UN College of Dentistry. After graduation, he served two years in the Army and was stationed in Okinawa during the first two years of the Vietnam War. He then decided to locate his dental practice in his hometown where he practiced for almost 40 years.

Shortly after he began practicing, he met Sherry Fisher on a blind date. Eventually, his mother told him if he didn’t ask her to marry him, she would! They were married for 53 years and raised two sons, Jeff and Chris. He was so proud of them and his grandchildren, Cole and Avery, delighting in seeing them grow and thrive. He treasured time with each of them, schooling them in fly fishing, hunting, accountability and generosity.

Professionally, he served on the Colorado State Dental Review Board and was known for hosting popular goose hunts for the state officers of the Colorado Dental Association. He worked hard building a large practice and was known for serving his patients, taking the time to know them personally and serving his community, serving on several community boards including Lamar Community College and helping with the ball fields. His passion was to see improvements at the golf course and enjoyed his coffee buddies every morning there and later at Rivals. He also enjoyed some winter trips to Arizona seeing friends and playing golf. In recent months, he battled through health challenges with the same strength and resolve he had learned in overcoming polio, always maintaining his genuine interest in the lives of others. He loved people, and they loved him. He will be truly missed.

Gib is preceded in death by his parents.

He is survived by his wife Sherry of the family home in Lamar. His children; Jeffrey (Beverly) Sprout, D.D.S. of Highlands Ranch, CO, and Christopher Sprout, D.D.S. of Lakewood, CO; grandchildren Cole Sprout currently at the University of Stanford and Avery Sprout currently at Auburn University. He is also survived by his brother James P. “Jim” (Sonya) Sprout of Ft. Collins, CO; niece Rachel Sprout and cousin Ray (Dianna) Gilbert of Lamar, Co as well as other relative and many friends.

Memorial Contributions may be made to the Lamar Area Hospice and/or High Plains Fellowship Church either direct or in care of the funeral home office.

Arrangements for Gib are under the direction of the Peacock Family. Services for Gib will be streamed live on the Peacock Funeral Home Facebook page.
To order memorial trees or send flowers to the family in memory of Gilbert "Gib" Lee Sprout, DDS, please visit our flower store.