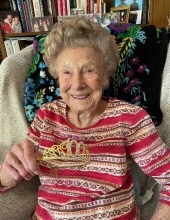 Gertrude Ina “Gertie” Jameson
A celebration of life for longtime Lamar, Colorado resident, Gertrude Ina Jameson, affectionately known to her family and friends as Gertie will be held at 10:00AM on Saturday, January 15, 2022 at the Peacock Family Chapel with Pastor Rory Gillespie of the First Presbyterian Church officiating. A private family interment will follow at the Fairmount Cemetery. A celebration of life gathering will be held at Gertie’s home at 313 Willow Valley Drive in Lamar at 12:00 PM.

Services for Gertie will be streamed live on the Peacock Funeral Home Facebook page.

Per Gertie’s request there will be no visitation.

Gertrude I. Jameson was born on July 22, 1921 in southern Bent County, Colorado to Iva Ella Japhet and Gilbert H. Fairchild and passed away on January 1, 2022 at her home in Lamar at the age of 100. Gertie had four sisters and one brother. Her parents divorced and moved to Cheyenne, Wyoming when she was seven years old and she lived with her grandparents in Las Animas, Colorado. Gertie attended school in Las Animas and in Cheyenne, Wyoming.

When Gertrude married Cecil Finney in 1942, she was blessed with five amazing children, Della Lee, Sylvia, Anna Mae, John and Melinda. They lived in St. Louis, Missouri, where Cecil worked for a coin machine company and attended trade school in the evenings. Gertie worked part time as a switchboard operator in a large hotel, in her early 20’s she modeled for Stix Baur and Fuller department store, and attended St. Louis Business School in the evenings.

During World War II, Cecil, John and Gertie moved to Lamar and bought a coin machine business which covered most of southeastern Colorado. Cecil operated this business for a number of years, and then in conjunction with it, Cecil and Gertie opened Chief Amusement, a music store at 100 South Main Street here in Lamar. Several years later they acquired The Main Cafe and Lounge, which they considered at the time to be a temporary venture, but they sold it twenty-two years later.

Gertie and Cecil made their home in Lamar and Cecil’s daughters spent their summers here with them, and their daughter Melinda was born here. Melinda and John both graduated from High School in Lamar. After thirty-four years of marriage, Cecil passed away from lung cancer.

In 1977 Gertie married the love of her life Ray Jameson, who formerly had farmed near Granada, Colorado. Ray had two children, “Cotton” and Diane, from his first marriage, who were both married and had families. Ray and Gertie moved to Page, Arizona, where they bought a home. Ray was retired, so they spent a lot of time on Lake Powell on their houseboat. Ray was an avid fisherman, and they traveled extensively in the United States, Canada and Alaska during their ten years of marriage. Ray passed away of cancer in 1987. Gertie had kept her home in Lamar while she and Ray lived in Arizona, so after Ray’s death, she moved back here in 1988.

Since returning to Lamar, Gertie kept very busy with her church and club activities. She was a member of the Presbyterian and Lutheran Church’s in Lamar and has belonged to Kappa Master Chapter of Beta Sigma Phi for sixty-seven years. She is a member of the Federated Women’s Club Sorosis, the Ace Hi Bridge Club, and PEO Chapter D. She also enjoyed traveling around the United States, Mexico, Europe and Australia.

Gertie was very grateful to God for her health, her family, His guidance, and His many blessings.

In lieu of flowers memorial contributions may be made to the Lamar Area Hospice either direct or in care of the funeral home office.

Services are under the direction of the Peacock Family.
To order memorial trees or send flowers to the family in memory of Gertrude "Gertie" I. Jameson, please visit our flower store.