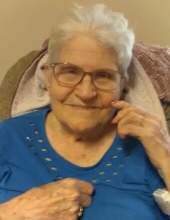 Violet Geraldine (Ely, VanCampen) Schnabel
A memorial service for longtime Baca county resident, Violet Geraldine Schnabel will be held at 10:00AM on Saturday, September 26, 2020 at the Star Community Church located at 27999 County Road D, Granada, Colorado 81041. Inurnment will follow at the Holly Cemetery.

Violet Geraldine (Ely, VanCampen) Schnabel was born on October 5th, 1927 in the community of Deora, Colorado to Charlie Raymond and Millie (McEndree) Ely. She grew up on the family farm with her brother (Vernon) and sister (Genevieve). As a small child she accepted the Lord as her savior. The family lived in LasAnimas for a time, where she attended high school. After high school she earned a teaching certificate and taught grades 1-8 in a one-room country school in Deora. She met, and married Everett E. VanCampen on October 28th, 1946. To this union three children were born: Johnnie in June of 1948; Everett Lee, September 9th, 1949; and Mary Anne, January, 1952. Her husband passed away as the result of a farm accident on October 13, 1952. On March 17, 1954 Geri married Paul Schnabel, a widower with 6 young children. She raised 7 children on Paul's farm in the rural community of Lycan, Colorado, 50 miles southeast of Lamar. She lived there 58 years, during which time she was once again widowed when Paul Passed away on October 8th,1989. In 2012 she moved to Two Buttes, Colorado, and 5 years later to Maplewood Homes Assisted Living in Walsh. She lived there until moving into the Walsh Nursing Care Center in early 2018. In August of 2019 her family moved her to Villa Pueblo Nursing Center in Pueblo, Colorado where she passed through Heaven's gate on June 28th, 2020. Geri was a devoted wife, mother, grandmother, great-grandmother, and great-great-grandmother. She was a faithful and active member of Star Community Church for 66 years. She was also an active member of the Gideons International Fellowship Auxiliary. She taught Sunday School, Vacation Bible School, Good News Clubs, and 4-H clubs for many years. She and Paul also transported van loads of young people to Awanas. She was a faithful prayer warrior, praying daily for every member of her family by name, as well as many missionaries, politicians, and friends. She was well known for her hospitality and entertained numerous visiting pastors, missionaries, evangelists, family and friends in the 3-story, 7-bedroom farmhouse Paul built. She was a very accomplished seamstress, handcrafting nearly all of her large family's clothes. She also handmade numerous quilts for the family, as well as for the Ladies Mission Society of her church. She raised large gardens to help feed her family, preserving enormous quantities of canned and frozen foods. She also kept a beautiful yard. She was preceded in death by her parents, brother and sister, 2 babies, both husbands, her oldest son, Dale (Alice) Schnabel; one daughter-in-law, Connie (Paul Jr.) Schnabel; one son-in-law, Aaron (Shirley) Beisel; one grandson, Floyd Henry (Henry) Schnabel; one granddaughter, Cheryl (Marilyn Schnabel) Hodges; one grandson-in-law, Jim (Geula) Sherman; two great-grandchildren: Wyatt Jeffrey(Nicole) Dorencamp, and Maddison Ashley (Amber Myers) Inskeep; and 2 nephiews: Walter(Vernon) Ely, and Preston(Genevieve) Grover. Geri is survived by daughter-in-law, Alice (Dale) Schnabel of Lamar; daughter, Shirley (Aaron) Beisel of Pueblo; son, Henry (Ruthie) Schnabel of Bristol; son, Don Schnabel of Pueblo; daughter, Twila (Monty) Brooks of Pueblo; son, Paul Jr.(Marilyn) Schnabel of Carnegie Oklahoma; son, Everett VanCampen of Loveland (Carol, of Ft. Collins); 21 grandchildren, 57 great-grandchildren, and 43 great-great-grandchildren, as well as numerous nieces and nephews. She will be greatly missed by all who knew her. Our loss is Heaven's gain.
To order memorial trees or send flowers to the family in memory of Geraldine "Geri" Schnabel, please visit our flower store.