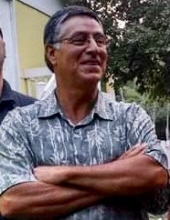 A Mass of Christian burial for longtime Lamar resident, Lawrence George Archuleta, affectionately known as George will be held at 10:00AM on Saturday, February 15, 2020 at the St. Francis de Sales/Our Lady of Guadalupe Catholic Church with Reverend Henry Wertin as celebrant. A rosary service will be held prior to the mass at 9:30AM with Deacon Allan Medina reciting. Interment will follow at the Riverside Cemetery.

George was born on January 5, 1958 at Rocky Ford, Colorado to Silvano and Ruth (Tafoya) Archuleta and passed away on February 6, 2020 at the Parkview Medical Center in Pueblo, Colorado with his family by his side at the age of 62.

He is preceded in death by his father, Silvano Archuleta, brothers, Clarence, Chris and Tom Archuleta and his sister-in-law, Paula Archuleta.

Memorial contributions may be made to the Diabetes Association either direct or in care of the funeral home office.

Services are under the direction of the Peacock Family.
To order memorial trees or send flowers to the family in memory of George Archuleta , please visit our flower store.