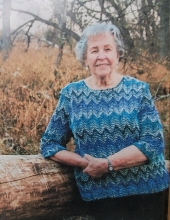 Freida Rose Roberts, 91 passed away peacefully surrounded by family on February 14, 2021, three months after suffering a massive stroke. Visitation will be held on Monday, February 22, 2021 from 9:30AM until 11:00AM at the Peacock Family Chapel. This will be followed by a Celebration of Life Memorial Service at 1:00PM at the First Baptist Church, 1600 So. Main St., Lamar, CO.

Freida worked as a secretary for various businesses. She worked at Hadley Memorial Hospital, Hays, Kansas; Farmers Home Administration in both Springfield and Lamar, Colorado; several federal offices in Denver, Colorado and the registrar’s office at Lamar Community College. She retired in 1992. She was still active at First Baptist Church, Lamar Senior Center, Area Agency on Aging Advisory Council and the local Red Hat Ladies until COVID.

Freida and the love of her life, Elmer met in Nickerson High School when they were seniors. Freida had just moved there with her family and was having problems with her locker. Elmer sidled over and asked her if she was a freshman and if she needed help. That didn’t set well with her and she let him know that she was a Senior! A two-year courtship started and ended in marriage on June 5, 1949, at the United Methodist Church in Nickerson, Kansas. Homes have been established over the past 71 years in Kansas (Plainville, Great Bend, Hays) and Colorado (Colorado Springs, Springfield, Englewood, Arvada, Lamar & La Junta). The couple have spent 48 years in Lamar.

Freida was a talented artist, seamstress, gardener, crafter and dearly loved all of her extended family. Freida and Elmer hardly missed a family event (reunions, grandchildren’s sport’s events, weddings, celebrations, installations and funerals). Freida started playing bridge early in life and was still at it until March 2020. She loved bridge and many other kinds of games and was known for her occasional, devious tactics.

Memorial Contributions may be made to the Lamar First Baptist Church either direct or in care of the funeral home office.

Services are under the direction of the Peacock Family.
To order memorial trees or send flowers to the family in memory of Freida Rose Roberts , please visit our flower store.