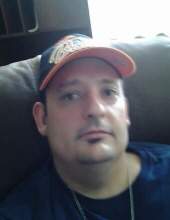 A mass of Christian burial for La Junta resident, Fortino Angel “Tino” Torrez, Sr. will be held at 10:00AM on Friday, December 1, 2017 at the St. Francis de Sales/Our Lady of Guadalupe Catholic Church with Reverend Mariusz Wirkowski as celebrant. A rosary service will be held at 6:00PM on Thursday, November 30, 2017 at the church. Interment will follow at the Riverside Cemetery.

Tino was born on November 8, 1973 at Santa Ana, California to Louie Edward, Sr. and Mary Rittenhouse and passed away on November 23, 2017 in La Junta, Colorado at the age of 44.

He is preceded in death by his paternal grandparents, Luiz and Amelia Torrez and his cousin, Eric Torrez.

In lieu of flowers memorial contributions may be made to the Lamar Area Hospice either direct or in care of the funeral home office.
To order memorial trees or send flowers to the family in memory of Fortino "Tino" Angel Torrez, please visit our flower store.