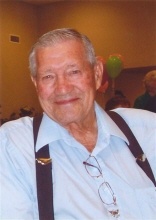 A celebration of life for longtime Wiley resident, Floyd Downing was held at 10:00AM on Thursday, August 27, 2015 at the Lamar Christian Church with Ian Blacker officiating. Interment followed in Wiley Cemetery under the auspices of the Lamar Elks Lodge #1319.

Floyd was born on October 20, 1928 to George and Iola Mae (Atwood) Downing  at his parents’ home place near Wiley, Colorado and passed away on August 24, 2015 at his home in Wiley with his family by his side at the age of 86.

He is preceded in death by his first wife, Doris (Dunn) Downing; his parents; and his siblings, Charles and Marjorie.

Memorial contributions may be made to the Lamar Area Hospice, Wiley United Methodist Church and/or Lamar Christian Church either direct or in care of the funeral home office.
To order memorial trees or send flowers to the family in memory of Floyd Downing, please visit our flower store.