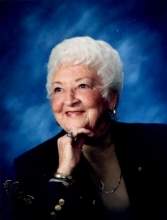 A memorial service for current Golden, Colorado resident, formerly of Lamar, Fern Burns was held at 10:00 AM on Thursday, March 26, 2015 at the Lamar United Methodist Church with Pastor Troy Greer officiating.  A private family in-urnment followed at Fairmount Cemetery.

Per Fern’s request, cremation took place and there was no visitation.

Fern was born on December 2, 1917 at Stanton County, Kansas to Jesse Franklin and Iva Hazel (Henry) Conard and passed away on March 19, 2015 at the Golden Pond Retirement Community in Golden, Colorado at the age of 97.

She is preceded in death by her husband; Forrest G. Burns and her parents.

Memorial contributions may be made to the American Cancer Society either direct or in care of the funeral home office.
To order memorial trees or send flowers to the family in memory of Fern Burns, please visit our flower store.