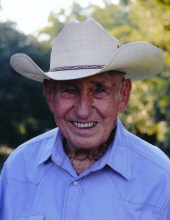 F J. Denning
A mass of Christian burial for longtime Lamar resident, F. J. Denning will be held at 1:00 p.m. on Monday, September 18, 2017 at the St. Francis de Sales/Our Lady of Guadalupe Catholic Church with Rev. Henry Wertin as celebrant. A rosary service will be held at the church on Sunday, September 17, 2017 at 6:00 p.m. with Rita Aguilera-Ybarra reciting. Interment will follow the mass at the Fairmount Cemetery in the Veteran’s Section with full Military honors under the auspices of the local V.F.W. and American Legion Posts.

Lutz was born to Michael and Pauline (Basgall) Denning in Ellis, KS. Lutz was the 7th of 8 children. He had 5 brothers – Frank, Tom, Vic, Mike and Mac and 2 sisters Josephine and Georgeanna. Lutz married Katherine (Katie) Gerlock on November 25, 1941 (12 days prior to Pearl Harbor being bombed) and was called to serve in WWII in the Army/Airforce May 1942.

Katie accompanied Lutz through the end of the war and his discharge in November, 1945. During this timeframe, 2 children were born of the marriage, Pauline and Joann. In 1946, Lutz and Katie settled into farming in the Holly/Hartman areas. Through the years to come, they continued to build their family with the births of Mary Alice, Darlene, Lenny and Jane.

Lutz was never afraid of hard work and provided a living and home for his family through many hard years of work at farming, and later traveled to Lamar to work at Cross Manufacturing and NEOPLAN.

As the children grew up and left home, Lutz and Katie moved to Lamar, but continued to enjoy visits to the farm to tend to their garden and enjoy time together.

After 68 great years of marriage, Katie passed away January 24, 2010. Lutz continued to live in their home in Lamar and spend time with their adult children and grandchildren. Lutz remained active in the management of his farm in Hartman and the maintenance of his home in Lamar, enjoying the company of his German Shepherd dogs who accompanied him on his visits to the country.

In addition to his loving wife Katie, Lutz was preceded in death by his son, Lenny Denning, his parents, his 5 brothers (including the loss of Mac who was killed in action during WWII) and 2 sisters, in addition to sons-in-law, L. Kenneth Brown and Ron Trumble.