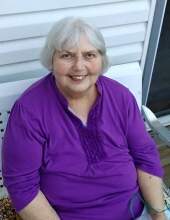 Etta was a longtime loving wife to Michael K. Allen for 31 years, together for 35.

She was preceded in death by her parents; two sisters – Sharon and Karen; one brother – John O’Neal; and one brother-in-law – Kelly Allen

She is survived by her loving husband – Michael K. Allen of Lamar; her sons – Kevin (Sonya) Ortiz of Lamar; Christopher (Liz) Allen of Arapahoe, CO; by her daughter – Shelley (Mandy) Allen of Canon City, CO; by six grandchildren – Jonothan, Justin, Ronan, Dennis, Dakota and Ashley; and by one great-grandchild Logan; by her brothers – George O’Neal and Jim O’Neal; numerous nieces and nephews to include Vanessa Mizak; as well as her mother-in-law – Arleta Allen; sisters-in-law – Sandra Allen, Cindy Falconburg and Diana Tixier; and by her brothers-in-law – Scott Allen and Pat Allen.

Those desiring may make memorial contributions and donations to the Peacock Funeral Home to help with final expenses.
To order memorial trees or send flowers to the family in memory of Etta M. Allen, please visit our flower store.