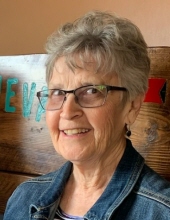 Elmina Lois Gardner
A celebration of life memorial service for longtime Lamar resident, Elmina Lois Gardner will be held at 10:00AM on Friday, December 3, 2021 at the First Southern Baptist Church with Pastor Paul Floyd officiating. Inurnment will follow at the Fairmount Cemetery.

Elmina was born on August 25, 1944 in Lamar, Colorado to Gilbert and Reva (Hurd) McCorkle and went to be with the lord at the age of 77.

Memorial Contributions may be made to the First Southern Baptist Church either direct or in care of the funeral home office.

Services are under the direction of the Peacock Family.
To order memorial trees or send flowers to the family in memory of Elmina Lois Gardner , please visit our flower store.