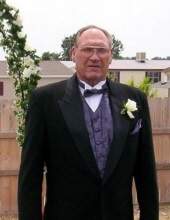 A memorial celebration will be held at 10:00AM on Saturday August 19, 2017 at the Peacock Family Chapel with Ian Blacker of the Lamar Christian Church officiating. A private family in-urnment will be held prior to the memorial.

Per Eldon’s request, cremation has taken place and there will be no public visitation.

Eldon married the love of his life, Reva, on May 26, 1964 in Lamar. To this union were born two sons, Gene and Kelly.

Eldon and Reva loved to travel and had many adventures through their 46 years of marriage. They drove the nation camping and exploring many sites along the way with the boys in tow. Later in life they enjoyed flying on “Mystery Trips”, traveling with nieces and nephews to many locations and camping with their Good Sams Group. Eldon often talked of their weekend trips and how they would flip a coin on which direction to head out of town. No matter what they did, they had fun and made friends along the way.

Eldon and Reva were very involved in boy scouts and mentored many boys through the years in the program. Eldon had many stories about campouts, trips, and jamborees with the scouts. From Kelly’s cooking that no one would eat, to watching kids fall in the water from the canoe, he remembered them all.

When Eldon and Reva were blessed with grandchildren they were beyond thrilled. They spent as much time as they could with them and always loved having them for summer visits. As the grandkids grew, so did the antics. Eldon loved to tease the kids and they were happy to dish it right back to him.

Eldon was a wonderful caregiver for many years to Reva after her stroke. He wouldn’t hear of having her any place but by his side at home. It was a big undertaking, but he never complained and always made sure she had everything she needed.

Eldon was a friend to many, no matter where he went, he talked to everyone. If you were with him on a shopping trip in Lamar, you better plan on double the time for the trip, as he probably talked to 20 people just upon entering the store. Whether it was a quick hello, catching up on life, or getting a hug, Eldon never passed up those opportunities.

Stories, boy did he have a lot of them and they seemed to get bigger and better with time. Whether it was the time they were racing down the street and ran into a house, or fishing and sinking a boat with Gene in a storm, he had a story. He knew how to have fun and passed that trait onto his grandkids. They loved to get him talking on and on, encouraging every word from him.