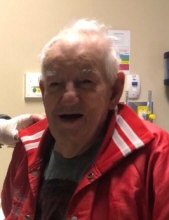 Edwin “Ed” B. Spitzer
A private family graveside service for former Lamar resident currently of Walsenburg Colorado, Edwin “Ed” will be held at the McClave Cemetery with Pastor Mike Schneider of the Wiley Community Church officiating.
Ed was born near McClave, Colorado to Eli Franklin and Eva Marie (Colebourn} Spitzer and passed away in his sleep April 22, 2020 at the Spanish Peaks Veteran’s Community Living Center in Walsenburg, Colorado at the ae of 93.
He is preceded in death by his parents, his brothers, Harold, Lloyd, Clyde, and twins Robert and Richard and his sisters Mary Chatham, Thelma Schibbelhut and Lola McElroy. Ed is survived by his brother, Harry (Flossie) Spitzer of Lamar and his sister, Norma Boggio of Lamar, Colorado as well numerous nieces, nephews, cousins, other family, and a host of friends.
Ed graduated from McClave High School where he was active on the school track team. He worked on the farm and was always in a good mood and always a friend to everyone.
He also worked for the Ark Valley Hay mill and went with a crew to the Dakota’s to grind hay. One Christmas when they were in the Dakota’s the crew decided to come home. Ed told the crew he was going to stay there but after they had left, he decided to come home to Wiley. He hitch-hiked all the way home and beat the crew home.
Ed was in the Army and served from 1950-1952 and served some time in Germany. He was honorably discharged when he returned from overseas.
After he was discharged, he went to Idaho where his brother Harold and wife Ruth were living. He returned to Lamar after several years there and lived with his sister Thelma for a while. He did odd jobs and collected aluminum cans around Lamar in his spare time. He became friendly with several of the businesses who saved cans for him.
In 2008 he was accepted by the Spanish Peaks Community Living Center where he lived until he passed. He loved it there and all the nurses liked him.
Memorial contributions may be made to the Spanish Peaks Community Living Center either direct or in care of the funeral home office. Services are under the direction of the Peacock Family.
For current information and online condolences please visit our website at www.peacockfuneralhome.com. Services will be live streamed on the Peacock Funeral Home Facebook page at 11:00am on Friday, April 24, 2020.
To order memorial trees or send flowers to the family in memory of Edwin "Ed" B. Spitzer , please visit our flower store.