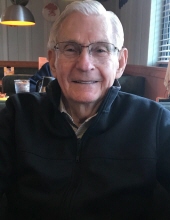 Per Ed’s request cremation will take place and there will be no visitation.

He is preceded in death by his wife, Marie Wallace, his parents, siblings, Mary Wallace, Marguerite Heider and Jack Wallace.

In lieu of flowers memorial contributions may be made to the St. Jude’s Hospital, Lamar Area Hospice and/or SECCI either direct or in care of the funeral home office.

Services are under the direction of the Peacock Family.
To order memorial trees or send flowers to the family in memory of Edward "Ed" J. Wallace , please visit our flower store.