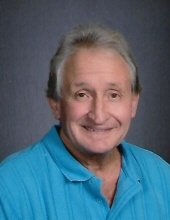 Doyle was born in Lamar, Colorado on June 29, 1948 to his parents, Dale and Dorothy Leathers, also of Lamar. Doyle went to Heaven on March 15, 2022. Doyle graduated with an MBA Degree from Wayland Baptist University and a Specialty Engineering Degree from The University of Wisconsin. He was a U.S. Army Vietnam-era veteran, and helicopter crew chief while serving in the military. Doyle lived in Lamar, Colorado after serving in the Army, and was the drilling and production foreman for Texas Oil & Gas Corporation for many years. He married Bunny Leathers on New Year's Eve in Las Vegas on December 31, 1988. He and Bunny moved back to her hometown of Amarillo, Texas and both became employed at The U.S. DOE Pantex Plant. They worked at Pantex for over 20 years and both retired from there. Doyle was one of the most talented and gifted human-beings and loved making special gifts for the special people in his life, from making custom knives and holsters, to making beautiful stained glass and etched glass art items to even being able to make lovely furniture. He was Bunny's EVERYTHING. He enjoyed playing on a pool league team for Mulligan's with his team captain and favorite Uncle Dan Luther. Bunny's Aunt Beth was Dan's wife, and she and Bunny loved to go watch their guys play. When Bunny didn't have him hopping for her, he loved the Texas sunsets. His favorite places to view the sunsets were at Jerry & Margaret Hodges' High Card Ranch and the view from the Amarillo Club. He also loved the times he and Bunny shared at their Diamond W Ranch in Cottle and Childress Counties. Doyle and dear friend Jimmy Estes spent many happy hours together at the ranch. He used to say Jerry and Margaret were his guardian angels who knew Bunny well, and realized Doyle needed a break from Bunny bossing him. Doyle and Bunny became extremely fond of Jerry's mama, Delores, who lived across the street from them. And when he really got to unwind and enjoy dinner, he loved to spend time with the Hodges and Congressman Ronny Jackson, and wife, Jane. Doyle and Bunny shared a special life-long friendship with Andrea and Gary Woolley, ranchers in Spearman, Texas. He was preceded In death by his parents, Dale and Dorothy Leathers of Lamar, Colorado. Doyle is survived by his wife, Bunny, his son, Jared Lee Leathers and daughter-in-law, Jennifer, and grandson, Gage Wayne, and granddaughter, Lainee Jacelyn Leathers, all of Springfield, Colorado. Doyle's twin brother, Dennis, and wife Kathy, reside in Holly, Colorado. Kathy is the Methodist minister in Holly. His sister Debbie Vigue, and husband, Mike, reside in Lamar, Colorado. Doyle was a patriot in every respect and loved his country and his church family at St. Paul Methodist Church. He adored Pastor Bill Ivins and the St. Luke members. And his most special friends, Carl and Glenda Roberts, were also long-time friends and members with he and Bunny at St. Paul. Doyle was on the Security Team at the church. DOYLE ALWAYS KNEW THAT HIS MOST FAVORITE PERSON AND HIS MOTHER-IN-LAW, TEENIE WAKEFIELD, WOULD BE WAITING WITH GOD IN HEAVEN WHEN HE ARRIVED. Any memorials, Doyle gratefully asks that they be sent to Pastor Bill Ivins, St. Paul Methodist Church, 4317 1-40, Amarillo, Texas 79106.
To order memorial trees or send flowers to the family in memory of Doyle Lynn Leathers , please visit our flower store.