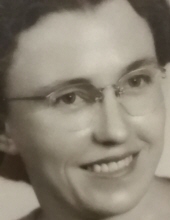 Dorothy Walker
A graveside celebration of life for longtime Holly, Colorado resident, Dorothy Walker will be held at 1:00PM on Monday, October 23, 2017 at the Holly Cemetery with Pastor Paul Floyd officiating.

Dorothy was born on December 28, 1918 at Strawn, Kansas to Clarence and Mabel (Gangloff) Beer, and passed away on October 15, 2017 at the Weisbrod Memorial Nursing Home in Eads at the age of 98.

Dorothy is survived by her children, Jean Telfer of Oregon, Carol (Earl) Hunsicker of Fort Collins, CO, Janice (Joe) Holvoet of Hotchkiss, CO, and Sharon (Bobby) Northam of Manor, KS; as well as eight grandchildren, and several grandchildren. She is also survived by numerous nieces, nephews, cousins, other family and a host of friends.

Dorothy liked to be known as a farmer. She was happiest when plowing fields and watching the wheat grow. Throughout the years of her life, she talked about growing up in Kansas with her only transportation being a horse. Dorothy got to see a lot of change in her almost 100 years of life, from horse and buggy, to cars, airplanes, space travel, computers, telecommunications, and more. She was a spirited woman, and she will be missed by family, friends, and those who grew to know and love her over the years.

The family is requesting that in place of flowers, memorial contributions may be made to the American Cancer Society either direct or in care of the funeral home office.

Services are under the direction of the Peacock Family.
To order memorial trees or send flowers to the family in memory of Dorothy Walker, please visit our flower store.