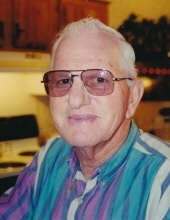 Donald M. Casey. age 82, passed away on Tuesday, February 11, 2020 at Memorial Hospital in Colorado Springs, Co. He had been battling with pneumonia for several weeks. He was in the presence of his wife (Shirley) when he passed.

He was a longtime resident of Lamar, Co.

Don worked for H&T Trucking for over 45 years. His truck and hauling cattle was his biggest passion. He tried to retire from trucking when he turned 80, but he was the type of person who always had to be working. He returned back to trucking a year later and worked for H&T Trucking until his passing.
Don was a devoted loving husband to Shirley for over 45 years.
His hobbies were watching old western movies and rodeos. He was fascinated with horses since he was 6 years old and was a trail guide for many years. One of his dreams was to attend the National Finals Rodeo in Las Vegas, Nevada. H&T Trucking was gracious enough to send him in December, 2019.
Don was the most caring and honest person that anyone had the fortune to know. He will be deeply missed by his friends, family and all who knew him.

He is preceded in death by his siblings, Guy, Janis, Fern and Illa Delores.

Don is survived by his wife Shirley, five children- Debbie, Rick, Bryan, Donnie JR and Delores,
and his siblings- Kim, Dennis, Doris and Brenda. As well as many nieces, nephews and grandchildren that loved him very much.

Memorial contributions may be made to the Don Casey Memorial Fund in care of the funeral home office.
To order memorial trees or send flowers to the family in memory of Don M Casey , please visit our flower store.