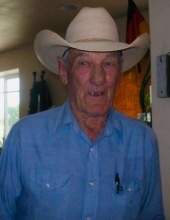 
A celebration of life memorial service for longtime Lamar resident, Donald E. States, affectionately known to many as Don, will be held at 10:00 AM Friday February 7, 2020 at the Peacock Family Chapel in Lamar with Pastor Mike Lewis officiating. A private family scattering of ashes will take place at a later date.

Per Don’s request cremation has taken place and there will be no public visitation.

Don States was born on September 4, 1931 in Hartman, CO to Guy States and Gladys Hummel-States and departed this life on Wednesday January 29, 2020 at his home in Wiley at the age of 88.

Don was preceded in death by his parents; wife – Betty Jean States; his brother – Buckley States; sister – Arlene; and by one son – Lyle States.

Don attended Holly High School where he met Betty Jean Oliphant. The two eloped to Springer, New Mexico on Christmas Eve in 1949. Around that same time, Don was drafted into the United States Army. While serving in the Army, Don was stationed in Puerto Rico. Upon his return he and Betty lived in a small house five miles North of Holly, Colorado where they were blessed with their two sons – Lyle in 1960 and Clint in 1963. They remained in that house until 1967 when they took the opportunity to live and work on the Hardscrabble Ranch a few miles West of Lamar, where they raised their boys until 1973 when a new opportunity to live and work on the Prowers Farm and Feedlot for the Broyle family. They stayed there until 1979 when the family moved back to the Hardscrabble Ranch. Between 1980 and 1982 Don and his family continued working the ranch but also split their time in Arizona where they tried their hand at mining gold. After this experience the family moved back to the Hardscrabble Ranch full time. It was while living here that Betty passed away in a tragic car accident in October of 1987. Don stayed in their home until 1997 when he moved East of Lamar to help his son Clint on his family farm. He continued working until 2015 when he finally retired and moved to Wiley where he spent the rest of his days until his passing.

Don was an accomplished horseman and spent many days in the saddle passing on his love of cattle and horses and the land to anyone lucky enough to ride with him. He was passionate about the state of our country and those who ran it and would spend hours discussing and debating the same with anyone who dropped by for coffee.

Those desiring may make memorial contributions to the Lamar Area Hospice either direct or in care of the funeral home office.
To order memorial trees or send flowers to the family in memory of Don E. States, please visit our flower store.