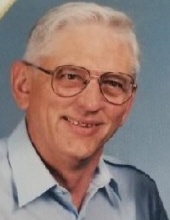 Don Deaton
A memorial service for longtime Lamar resident, currently of Pueblo, Colorado, Don Deaton will be held at 11:00AM on Thursday, August 5, 2021 at the Lamar Christian Church with Ray Matteson officiating. Inurnment will follow at the Fairmount Cemetery in Lamar.

Don was born on September 19, 1935 at Elk City, Oklahoma to Clarence William and Zola Ann (Yount) Deaton and passed away on July 23, 2021 at his daughter’s home in Pueblo, Colorado at the age of 85.

Donald Eugene Deaton grew up in Oklahoma, he was raised by his father and his two older sisters Pauline and Vera Mae. Don’s mother passed away from cancer when he was 6 years old.

He entered the Army in 1954, at the age of 19 and was honorably discharged in 1956. While in the Army he attended the Signal Corps School and was trained as a “High Speed Radio Operator”. After leaving the Army he started working as a telegrapher with the Santa Fe Railroad. His job took him to Cimarron, Kansas where he met and fell in love with Anna Mae Sears. They married in 1957 and their first daughter, Debra Lynn was born in Dodge City in 1958. When Debbie was 3 months old, he transferred to Lamar Colorado to work as a telegrapher, in the train depot there. They put down roots in Lamar and had 3 more daughters, Brenda Sue in 1959, Deidra Ann in 1963 and Barbara Jo in 1966.

Don delivered freight on the weekends. The freight came in on the train and he along with Bob Marston and Melvin Hendrickson would deliver orders to the local businesses. This was long before UPS and other companies were formed.

Don was promoted to train dispatcher in La Junta, Colorado and commuted for many years When Santa Fe decided to downsize and close the office in La Junta, Don was transferred to Newton, KS. and then once more transferred to Albuquerque, N.M. The company was downsizing again, and this time it would have been Chicago, IL. Don decided that was enough and retired in 1992 at the age of 57.

Don loved to go camping, family vacations were most often spent camping and fishing in the mountains. He loved to work in the yard, garden, and he was very skilled at woodworking. He was always willing to help with projects at the church, requests from his wife, daughters and friends who needed some advice or help in their homes. Don and Ann made countless marble boards and other craft items that Ann would lovingly paint to sell. Don and Ann loved to travel. They enjoyed taking grandchildren on camping trips or other places when possible. Don and Ann also traveled to all 50 states.

Don loved his family and joyfully welcomed each grandchild into the family. He was thrilled to finally have some boys around and taught them many things. He treasured his granddaughters also and had wonderful relationships with each of his grandchildren.


He is preceded in death by his first wife, Ann Deaton; his parents Clarence and Zola Deaton , son-in-law, Mike Herrera and sisters Pauline Prokup and Vera Mae Teasley.

Memorial contributions may be made to the Lamar Christian Church and/or Sangre de Cristo Hospice either direct or in care of the funeral home office.
To order memorial trees or send flowers to the family in memory of Don Deaton , please visit our flower store.