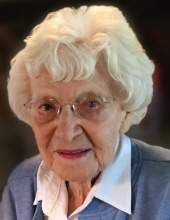 A private family inurnment for longtime Lamar resident, Dolly May (Brown) Adams
will be held at a later date.

Dolly is preceded in death by her parents, her husband of 44 years – J. W. (Bill)
Adams, her siblings Carl, Don, Lee, Gerald, Louise, Ada and Ruby and her former
husband Philip Rice.

Dolly was born and raised on the family farm, graduated from a one-room
country grade school and with a class of 26 from Pretty Prairie Rural High School
in 1940. In 1949 she visited her sister Ada in Lamar where she was working at the
Corner Pharmacy. She got Dolly a job at the same place and Dolly never left her
residence in Lamar.

Dolly married W.P. Rice in December 1949. They were together for 17 years
when he died in Nov. 1967. Dolly had several jobs in Lamar (Cole’s Pharmacy,
Guaranty Abstract and First Federal Savings and Loan). In 1956 she took
accounting classes at Lamar College and she was hooked. In 1962 her first
accounting job was with Marvin Strait, CPA and during her 12 years there, she
received more training first in bookkeeping and then in accounting.

On August 21, 1968 Dolly was out for her morning walk when Bill Adams rode by
on his motorcycle. The next day a dozen red roses were delivered to her door.
That was the start of the 44 years they shared together, they married Oct. 18,
1968.

In June 1975 Dolly changed jobs to become the internal accountant and worked
with David Eddelman at the Cow Palace Inn for 15 years, where she retired on July
1st 1990. Her retirement along with Bill’s retirement from Lamar RE2, meant lots
of golf for Bill and a chance for Dolly to be a full-time housewife. She loved doing


handwork and pulled a needle or a hook thru many stitches for afghans. She also
enjoyed spending time with her flowers and working in the yard and watching Bill
golf, until he passed away on January 9, 2013.

In lieu of flowers, memorial contributions can be made to Lamar Area
Hospice and/or the American Diabetes Association either direct or in care of the
funeral home office.
To order memorial trees or send flowers to the family in memory of Dolly May (Brown) Adams, please visit our flower store.