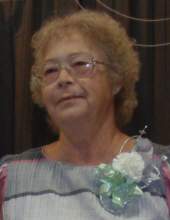 Deloris “Dee” Pearson
A private family memorial service for longtime Lamar resident, Deloris Pearson, affectionately known as Dee, will be held at a later date.
Per Dee’s request cremation will take place and there will not be a visitation.
Deloris (Dee) Pearson was born at home in Barry County, Missouri on May 17, 1942. She departed her life on February 23, 2020 in Lamar, Colorado surrounded by her family.
She married Delbert (Doc) Pearson in Clayton, New Mexico on August 21, 1957. To this union were born Delbert Jr., Pam, Steve, Danny and Rex. Throughout her life besides being a homemaker she was a potato harvester, a bus driver, teacher’s aide, school cook, nurse’s aide, candy store owner, and assisted Doc in his bail bond business.
She served as Worthy Matron and Associate Worthy Matron of the Lamar Chapter of the Order of the Eastern Star. She enjoyed taking care of her grandchildren and reading. She loved spending time with her family, traveling, and playing the slots in Vegas. She also collected many things including clocks, figurines, hummingbirds, elephants, plates, books, and Bronco memorabilia.
She is preceded in death by her husband, Doc Pearson; her parents, Vernon Whitcomb and Opal Hoog; three sisters, four brothers, her granddaughter, Holli Pennington, maternal grandparents Otto Truman and Estella Mae (Watson) Hoog and paternal grandparents Raymond and Audie (Steenblock) Whitcomb.
Dee is survived by her children, Delbert (Charlene) Pearson, Jr. of Lamar, Pam Pennington of Greeley, CO, Steve Pearson of Wapiti, WY, Danny (Marcia) Pearson of Evans, CO and Rex (Sherry) Pearson of Walsenburg, CO; grandchildren, Brandon (Kara) Pearson, Sheldon (Ashley) Pearson, Sam (Candace) Zordel, Dustin (Tana) Pearson, Chris (Yasmin) Pearson, Laci Pennington, Hanna Pearson, Lizzie Pearson, Cory (Rhiannon) Pearson, Jaton (Ascencion) Najera and sixteen grandchildren. She is also survived by her siblings, Mary Scannell of Seligman, MO and Carolyn Wright of Lowell, AR as well as numerous nieces, nephews, other family and a host of friends.
Memorial contributions may be made to the charity of choice either direct or in care of the funeral home office.
Services are under the direction of the Peacock Family.
To order memorial trees or send flowers to the family in memory of Deloris "Dee" Yvonne Pearson, please visit our flower store.