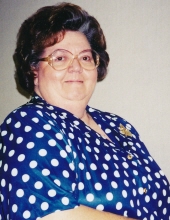 
A celebration of life memorial service for longtime Lamar resident, Dee McCullough, will be held at 10:00 AM Tuesday December 31, 2019 at the Peacock Family Chapel with Pastor Paul Floyd officiating. Burial will take place at a later date.

Dee was born on August 27, 1937 in Gladewater, TX to Frederick Herman and Bertha Olive Lee-Griem and departed this life on Friday December 27, 2019 at her home in Lamar with her family by her side at the age of 82.

Dee married Stan McCullough on Feb. 24, 1962 at Medicine Lodge, KS. To this union were born two daughters - Julie and Tarri. Living most of her life in Oklahoma and Kansas, the small family moved to Lamar in 1977. She began working at Valley State Bank in 1978, then moved to Colorado East Bank and Trust in 1995 until retiring in December of 2005.

Dee sang with a gospel trio for over 23 years and loved playing the piano for a local church for most of her life. She became a Christian while living in Kansas early on in her life. Her love for her daughters and grandchildren and many special friends, were a big part of her life.

Dee belonged to the local chapter of Rebecca's and also a member of Parkview Baptist Church in Las Animas. She loved her church and friends so much and enjoyed many years of giving piano lessons and working with the church choirs.

Dee was preceded in death by her parents; one brother – Herman Griem; and by one half-sister – Constance D. Moore.

Dee is survived by two children – Julie (Mike) Bellomy of Galeton, CO and Tarri Cantrell of De Smet, SD; by her grandchildren – Michael and Summer Bellomy and Kacy Segers and Lyaneah Lingle; by a sister-in-law – Georgia Griem of Leoti, KS; as well as numerous nieces, nephews, other relatives and a host of friends.

Those desiring may make memorial contributions to the Domestic Safety Research either direct or in care of the funeral home office.
To order memorial trees or send flowers to the family in memory of Dee L. McCullough, please visit our flower store.