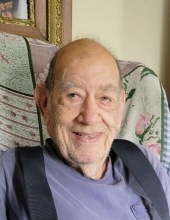 Darrold Dean Anderson
A graveside memorial service for former Lamar, Colorado resident currently of Tulsa, Oklahoma will be held at 11:00AM on Friday, February 18, 2022 at the Fairmount Cemetery in Lamar, Colorado. Military Honors for Darrold will be under the auspices of the local V.F.W. and American Legion Posts.

Darrold was born on April 8, 1932 at Lawrence, Kansas to Charles A. Anderson and Edith Pearl Elston Corbin and passed away on Thursday, January 27, 2022 at the St. Francis Hospital in Tulsa, Oklahoma.

After graduating high school Darrold enlisted with the US Air Force and while stationed in Spokane, WA he was married to Hermoine (Mickey) Seidel until 1975. After he was discharged from the military he moved to Lamar, Colorado where he worked as a carpenter with his brother. In 1975 he married Doris O. Patterson and they were married for 45 years until she passed in May of 2021. Darrold enjoyed hunting, fishing, playing the guitar and telling stories.

Services are under the direction of the Peacock Family.
To order memorial trees or send flowers to the family in memory of Darrold Dean Anderson, please visit our flower store.