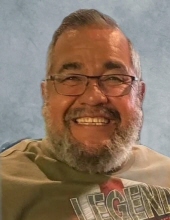 Joseph Daniel “Black” Gonzales
A celebration of life for former Granada resident currently of Colorado Springs, Colorado, Joseph Daniel Gonzales, affectionately known to his family and friends as Daniel “Black” will be held at 10:00AM on Wednesday, September 1, 2021 at the Lamar Christian Church with Ian Blacker officiating. Interment will follow at the Hillside Cemetery in Granada.

A memorial service for Daniel will be held at 2:00PM on Tuesday, August 31, 2021 at the Sunnyside Christian Church in Colorado Springs, Colorado with Eric Batteiger officiating.

Daniel was born on February 13, 1960 at Syracuse, Kansas to Napoleon and Cruz (Ibarra) Gonzales and passed away on August 24, 2021 at the St. Francis Hospital in Colorado Springs, Colorado at the age of 61.

He is preceded in death by his father Napoleon Gonzales, his mother Cruz Ibarra, his sisters, Margret Gonzales, Hilda Gonzales, Georgann Licon and Donna Gonzales and father-in-law Louis "Babe" Carr.

Services are under the direction of the Peacock Family.
To order memorial trees or send flowers to the family in memory of Daniel "Black" Gonzales , please visit our flower store.