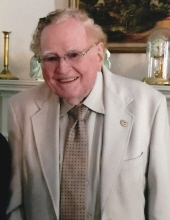 Funeral services for longtime Granada resident, Clyde B. Kennedy, will be held at 10:00 AM Friday December 29, 2017 at the Peacock Family Chapel in Lamar with Ian Blacker of the Lamar Christian Church officiating. Burial will follow in the Hillside Cemetery in Granada with Masonic Rites by the Granada Masonic Lodge # 72 A.F. & A.M. and full military honors by the Holly V.F.W. Post # 4281.

Clyde was born on March 13, 1919 in Lamar Colorado to Fred W. and Vera R. (Wood) Kennedy and departed this life on Thursday December 14, 2017 at the Holly Nursing Care Center in Holly Colorado at the age of 98.

Clyde was preceded in death by his parents and by one brother – Glen Kennedy.

Clyde B. Kennedy is survived by his wife of 72 years – Marie of Granada; by two children – Craig (Ann Turner) Kennedy of Centennial, CO; and Karen Kennedy of Highlands Ranch, CO. by three grandchildren – Shannon (Frank) Straub of Canandaigua, NY; Kimberly (Sam) Cox of Denver; and Melissa (Aaron) Schweid of Aurora; and by six great grandchildren – Oliver, Nora, and Vivian Straub, George Cox; and Aubree and Kinley Schweid; as well as a host of friends.

Those desiring may make memorial contributions to the Hillside Cemetery Fund in Granada or to the Granada Masonic Lodge # 72 A.F. & A.M. either directly or through the funeral home office.
To order memorial trees or send flowers to the family in memory of Clyde B. Kennedy, please visit our flower store.