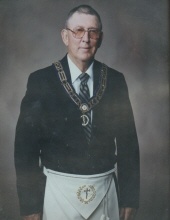 Clarence O. “Cowboy” Reynolds
A celebration of life for longtime Lamar resident, Clarence O. Reynolds, better known as Cowboy, will be held at 10:00AM on Tuesday, May 2, 2017 at the Peacock Family Chapel with Reverend Kathy Leathers of the Bristol/Granada United Methodist Church officiating. Interment with Masonic Burial Rites and full Military Honors will follow at the Fairmount Cemetery.

He is preceded in death by his wife, Jean Reynolds, his parents, brothers ,Carl (Eloise) Reynolds and Leo Reynolds and his sister, Mary Katherine (Ward) Long.

Clarence is survived by his cousin, Earl Reynolds who was raised like his brother, his nephew and niece, Steve and Audrey Benson as well as numerous nieces, nephews, a host of Reynold’s cousins, great-nieces and nephews and numerous other family and friends.

Memorial contributions may be made to the Granada Lodge #72 either direct or in care of the funeral home office.

Services are under the direction of the Peacock Family.
To order memorial trees or send flowers to the family in memory of Clarence "Cowboy" Reynolds, please visit our flower store.