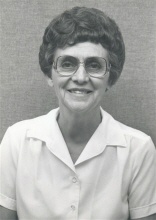 A service of celebration for longtime Lamar and Wiley resident, Clara C. Weber will be held at 10:00AM on Friday, May 29, 2015 at Fairmount Cemetery with Ian Blacker of the Lamar Christian Church officiating.

Per Clara’s request there will be no visitation.

She is survived by her daughter, Judy D. Weber of Lamar and her brother, Robert R. (Mary) Kammarcal of Deming, NM. She is also survived by other relatives and many friends.

She spent her early years as a farm wife. In 1957 she went to work in the county Treasurers office as a clerk first then was appointed the County Treasurer and served 2 ½ terms as Treasurer. Clara retired after 38 years in the office.

Memorial contributions may be made to the Lamar Area Hospice and/or Lamar Christian Church either direct or in care of the funeral home office.
To order memorial trees or send flowers to the family in memory of Clara Weber, please visit our flower store.