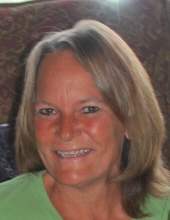 Brenda S. Barrow
A graveside memorial service for longtime Granada/Carlton resident, Brenda S. Barrow will be held at 2:00PM on Friday, May 21, 2021 at the Sunnyslope Cemetery in Bristol, Colorado with Pastor Paul Floyd and Ian DeBono co-officiating.

Brenda was born on December 17, 1960 at Pueblo, Colorado to Leslie Eugene and Stella Emilia (Monette) Carter and passed away on May 12, 2021 at her home in Lamar with her family by her side at the age of 60.

She is preceded in death by her parents, Leslie and Stella Carter; father and mother-in-law, A.D. and Patty Barrow, infant grandson Aden Eric Cope, and brother-in-law Billy Fagan.

Services are under the direction of the Peacock Family.
To order memorial trees or send flowers to the family in memory of Brenda S. Barrow , please visit our flower store.