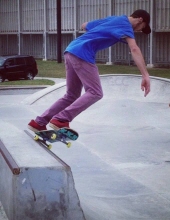 He is preceded in death by his brothers, Dakota Abling and Zachary Abling; Aunts, Karen Compton and Rita White; paternal grandparents, Thelma Watkins and Benton Batdorf.

Brandon is survived by his father, Rob Batdorf of Lamar, his mother, Marla Abling of Denver, CO; siblings, Schuyler (April) Batdorf of Greeley, CO, Samantha (Michael) Newman of Lamar, Ashley (Mike) Hernandez of Lamar and Emily Perona of Wiley, maternal grandmother, Elmina Gardner of Lamar and his nieces and nephews, Ethan, Emery, Semara, Harlowe, Cordel, Jaylen, Jolie, Kyler, Korbin and Aubree, to whom he was known as Bubba. He is also survived by his uncles, Richard (Carol) Batdorf of Lakewood, CO, Reggie Batdorf of Lakewood, CO and his aunt, Roxann Crawford of Lamar, CO as well as numerous cousins, other family and a host of friends.

Memorial contributions may be made to the Brandon Batdorf Memorial Fund in care of the funeral home office.

Services are under the direction of the Peacock Family.
To order memorial trees or send flowers to the family in memory of Brandon Scott Batdorf , please visit our flower store.