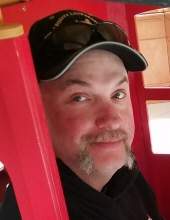 A graveside celebration of life for Cope, Colorado resident, Braden Lane will be held at 12:00PM on Saturday, August 18, 2018 at the Eads Cemetery with Pastor Lane Gooden of the Praise Community Church in Eads, Colorado.

Braden was born on August 16, 1975 in Lamar, Colorado to Clyde Richard Lane and Janet Marie Koester and passed away unexpectedly on August 14, 2018 near Kit Carson, Colorado at the age of 42.

He is preceded in death by his father, Clyde Lane, paternal grandparents, Worth and Elizabeth Lane and maternal grandfather, Herbert Koester, uncle, Art Lane and his father-in-law, Craig Hansen.

Services are under the direction of the Peacock Family.
To order memorial trees or send flowers to the family in memory of Braden R. Lane, please visit our flower store.