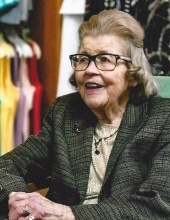 A Celebration of Life for longtime Lamar resident and business owner, Beverly J. Augustine will be held at 4:10 PM “So I won’t be late” Friday, February 18, 2022 at the Lamar First Presbyterian Church with Rory Gillespie officiating.

Visitation for Beverly will be held on Thursday, February 17, 2022 from 4:00PM until 6:00PM at the Peacock Family Chapel.

Interment will be held at the Crystal Lake Cemetery East in Frankfort, Michigan next to her husband “Clif” who passed away on June 9, 1984.

What an amazing woman! These words were often spoken when anyone encountered her.
Beverly Jayne was born to Dr. Joseph E. and Goldie L. (Fisher) Nelson on August 22, 1922 in Frankfort, Michigan. Since she was an only child, she had to be both their little girl and boy!. Her mother taught her to set a proper table, to knit and crochet, to believe in God, and the right color to wear. Her father taught her how to bait a fishhook, how to sail and how to row a boat competently, how to ski the slopes of Crystal Downs, and to never give up on what she thought was right.
Beverly went through all of her school years in Frankfort, being involved in every activity that was offered. After finishing high school in 1940, she attended and graduated from Northwestern University in Chicago, Illinois. She studied dietetics in school and was given a job through a placement service at The Maxwell House in Lamar, Colorado.

What a long train ride that was to the very unfamiliar, very flat, very open plains of Eastern Colorado. Beverly worked for the Maxwell House for four years. She worked at the restaurant planning menus, purchasing food, hiring personnel, and often acting as hostess.

In 1947, Beverly met the love of her life, Clifton F. Augustine. Clif was a cattle trader and owner of the Lamar Augustine Livestock Commission Co. Shortly after, she left her job at the Maxwell. She had decided to go into the clothing business. The Lassie opened in 1948. For 74 years, you could always find Bev at the store. It was her goal to make each day a little better for those who came through the door at The Lassie. She said their main commodity is service, and satisfied customers satisfied her.
Clif and Beverly were united in Marriage August 17, 1950 in Frankfort, Michigan. Shortly after, their daughter Julie was born. The family made their home here in Lamar, but Beverly’s summer address was at her cottage at Crystal Lake. Most of her birthdays were spent there. Her greatest pleasure for many years came from spending time with family and with her cows and donkeys.
Beverly also devoted much of her time to service. She was a member of Beta Sigma Phi and Zonta International, holding many offices with Zonta in the 69 years she was involved. She was the first woman to serve as director of the Chamber of Commerce. Beverly was also a member of the First Presbyterian Church and was honored to be ordained as an Elder in January of 1966. At the time of her death, she was still in charge of her little Hereford ranch, still living at home alone, and still going to the store each day.
Beverly will be remembered for her warm smile, her integrity, grace, courage, and faith. She was fun loving and enjoyed life with purpose and gusto. People that knew her will remember her for her friendliness, interest in people, and her wonderful sense of humor. She had a very curious mind. She loved people, and as a result, she had a multitude of friends. Her goal in life was to be kind and useful to others and she succeeded daily on both counts. She was a loving mother to her daughter, Julie, a proud Grandmother to Jason, and Great Grandmother to Skyler and Aubrie.

Beverly Jayne Augustine has gone home to her heavenly father and will return to rest beside her beloved husband in Frankfort, Michigan. Beverly was preceded in death by her parents and husband. She is survived by her daughter, Julie Vice. Grandson Jason (Amy) Vice, Great Granddaughters Skyler and Aubrie Vice, and a very special friend Jim. Beverly is also survived by cherished nieces, nephews, and many cousins.
Beverly left many things behind, these are words she had written in her notes. Pray every day, Love those you live with, Do what needs to be done, Leave the rest to God

Memorial contributions may be made to the Colorado CattleWomen Association in care of the funeral home office.

Services are under the direction of the Peacock Family.
To order memorial trees or send flowers to the family in memory of Beverly Augustine , please visit our flower store.