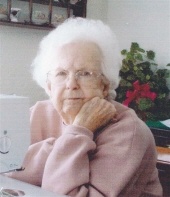 A funeral service for longtime Lamar resident, Berniece C. Morris, was held at 10:00 AM Wednesday June 17, 2015 at the Lamar United Methodist Church.  Burial followed in the Fairmount Cemetery in Lamar.

Per Berniece’s request there was no public visitation.

Berniece was born on August 20, 1917 in Walters, Oklahoma to Hugh L. King and Nellie Gladys (Gay) King and departed this life on Saturday June 13, 2015 at her home in Lamar, with her family by her side at the age of 97.

Berniece was preceded in death by her parents; by her husband – Winslow C. Morris; by one granddaughter – Shauna Lynn Morris; by two brothers – Lawrence King and LeRoy King; by one daughter-in-law – Janice “Ingram” Morris; by her step-mother – Cleo Dean King; as well as by one infant grandson- Christopher Morris.

Those desiring may make memorial contributions to the Lamar Area Hospice either directly or through the funeral home office.
To order memorial trees or send flowers to the family in memory of Berniece C. Morris, please visit our flower store.