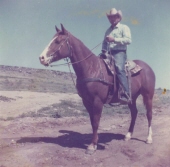 Funeral Services for lifelong Lamar resident, Benny Schibbelhut was held at 10:00AM on Thursday, January 14, 2016 at the Peacock Funeral Home with Ian Blacker of the Lamar Christian Church officiating. Interment  followed at Union Valley Cemetery in Hasty, Colorado.

Benny was born on September 5, 1927 at Lamar, Colorado to Alex and Elizabeth (Hilgenberg) Schibbelhut, Sr. and passed away at Prowers Medical Center on January 8, 2016 at the age of 88.

Memorial Contributions may be made to the Ronald McDonald House, Lamar Area Hospice, Make a Wish Foundation and/or to the charity of one’s choice either direct or in care of the funeral home office.
To order memorial trees or send flowers to the family in memory of Benny Schibbelhut, please visit our flower store.