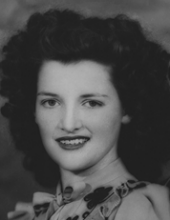 It is with great sadness that we announce the passing of Barbara Jean Reyher on July 26 2019.

Barbara (Jeannie) left us peacefully surrounded by her son, grandson and Family by her side at Health Science Centre in Winnipeg, Manitoba, Canada.

Barbara Jean was born at home in Hasty Colorado on June 30 1930. Schooled in Hasty, Colorado and met Russell at McClave High School in McClave, Colorado.

Barbara Jean Eckert was united in marriage to Russell Charles Reyher on June 8, 1947.

Russell and Barbara Jean established a home in McClave, Colorado where they raised two sons; Russell Edward and Randy Eugene.

Jeannie worked alongside her husband in Family farming, Ranching and Retail Stores.

In 1968 the Family immigrated to Canada to pursue Farming, cattle ranching and Thoroughbred racehorses.

In 1976 along with her husband and sons they started in the manufacturing of wood stoves later changing to gas Fireplaces, known as Kingsman Fireplaces.

Jeannie continued to work alongside her son Ed and grandson Charles after the passing of her son Randy and her husband Russell, up until she became ill in May 2019.

Jeannie was known as “grandma” to the office staff, employees and close friends.

Jeannie was a devoted Wife, Mother, Grandmother and Great-grandmother.
She Loved her Family.

Special thanks to the staff at Health Science Centre GH3, GH4 and GD5 for the care and compassion given to Barbara Jean

Public viewing for Jeannie will be held on Friday, August 9, 2019 from 3:00PM to 7:00PM at the Peacock Family Chapel.
Graveside services will be held at the Wiley Cemetery, Wiley Colorado on Saturday, August 10, 2019 at 10:00am with Reverend Travis Walker officiating.

The Hearts that Loved You Dearly are the ones that won’t Forget!

Local services under the direction of the Peacock Family.
To order memorial trees or send flowers to the family in memory of Barbara Jean Reyher, please visit our flower store.