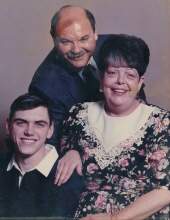 A celebration of life memorial service for longtime Holly, CO resident, Barbara Dreiling, affectionately known by many as Barb, will be held at 2:00 PM Friday April 6, 2018 at the Living Hope Fellowship in Holly, CO with Pastor Vikranth Kodavatikanti officiating. Burial will follow in the Holly Cemetery in Holly, CO.
Per Barbara’s request cremation has taken place and there will be no visitation.
Barbara was born on March 28, 1947 in Lamar, CO to Ward Gideon and Ruth Barth-Gideon and departed this life on Friday March 30, 2018 at St. Mary Corwin Hospital in Pueblo at the age of 71.
Barb is preceded in death by her parents and by her grandparents – Tead and Juanita Barth.
Barb is survived by her husband- Art Dreiling of the family home in Holly; by her children – Kathy (Anthony) Banuelos of Ft. Morgan, CO; and Chris (Amanda) Dreiling of McKenney, TX; by four grandchildren – Belinda and Emilio Banuelos and Joshua and Tyler Dreiling; as well as by one great granddaughter – Adrian Banuelos; and by a special friend that Barbara considered her sister – Connie Vocke of Holly as well as numerous nieces, nephews, cousins, other relatives and a host of friends.
Those desiring may make memorial contributions to the Down Syndrome Foundation either directly or through the funeral home office.
To order memorial trees or send flowers to the family in memory of Barbara A. Dreiling, please visit our flower store.