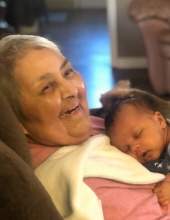 Augustina “Tiny” Silva
A celebration of life memorial service for longtime Granada resident, Augustina Silva, affectionately known to her family and friends as Tiny will be held at 10:00 AM on Saturday, January 11, 2020 at the Peacock Family Chapel with Pastor Paul Floyd of the High Plains Fellowship Church officiating. Inurnment will follow at the Hillside Cemetery in Granada.

Per Tiny’s request cremation will take place and there will be no visitation.

Tiny was born on August 28, 1942 at Wagon Mound, New Mexico to Augustine and Clorinda (Vigil) Trujillo and passed away on January 2, 2020 at her home in Granada with her family by her side at the age of 77.

As written by Tiny Silva:

Since I wasn’t given a middle name, I lived my entire life known as “Tiny”. At about the age of 9 my family moved to Lamar, Colorado where I lived until 1960 when I married into Granada.

To this marriage, we were blessed with five children, Phillip “Chunky” Silva, Natalie Musick, Greg Silva, Richard Silva and Andrea Dowd. And that added grandchildren, Shelley Silva, Amanda Silva, Devon Silva and Jon Silva and several extended members of their in-laws families. And now great grandchildren are in the picture, Cooper, Crosby, Mia and to include our newest addition, our little Ezra. Yes!! We were blessed with a wonderful family. This became more obvious as my illness progressed. Between my Lord and my family, I never walked alone.

She is preceded in death by her parents, Augustine Trujillo, Clorinda Gomez and Sam Gomez; her beloved son, Ricky Silva; her siblings, Marcella McPerk, Michael Gomez and Lawrence Gomez as well as several extended family and in-laws.

Memorial contributions may be made to the Lamar Area Hospice and/or Granada Fire Department either direct or in care of the funeral home office.

Services are under the direction of the Peacock Family.
To order memorial trees or send flowers to the family in memory of Augustina "Tiny" Silva, please visit our flower store.