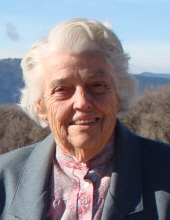 A come and go celebration of life for former longtime Lamar resident, currently of Fort Collins, Colorado will be held on Wednesday, May 30, 2018 from 11:30AM until 1:00PM at the Lamar United Methodist Church in the Great Hall. A private family internment will be held at a later date.

Long time Lamar resident Artie Ann Suposs passed away at her Fort Collins home on May 24, 2018. Artie Ann was the daughter of Leslie & Victoria DeHaven, born on November 22, 1926 in Lamar and attended Lamar Union High School graduating in 1944.

Artie Ann was married to Daniel Suposs on March 11, 1945 and was married for 55 years, and spent all but one year as a resident of Lamar. During these years Artie Ann and Dan raised 3 children, Gary Wayne, Dean Arthur and Doris Lynn. She was Treasure/Manager of Fellowship Credit Union from it’s infancy until her retirement in 2000 and continued to serve on the board of directors until 2006. The Education Foundation at Fellowship Credit Union was created in honor of Artie Ann in 2008 to provide funds for scholarships and ongoing youth financial education training for local students in the credit union’s field of membership.

Artie Ann was a 20+ year leader with the 4-H program in Prowers County and her work with the youth of Prowers County was rewarding and gave her enjoyment. She enjoyed many family camping vacations over the years and continued to enjoy the mountains after moving to Fort Collins with her daughter. Enjoying chocolate ice cream while watching the Big Thompson River in Estes Park turned into one of her favorite pastimes.

Artie Ann was a member of the Lamar United Methodist Church and was known for her work at the semi-annual Rummage Sale. A passion she continued while recycling clothes in Fort Collins while volunteering for the PVH thrift store. When she was not volunteering you could find her playing in the soil planting vegetables or flowers. She loved to look at the blooming flowers and eat the home grown vegetables.

She was preceded in death by her husband Daniel Suposs, parents Leslie & Victoria DeHaven and brother Leslie B DeHaven.

In lieu of flowers memorial contributions may be made to the Fellowship Credit Union Foundation, Lamar United Methodist Church and/or Alzheimer’s Association either direct or in care of the funeral home office.

Services are under the direction of the Peacock Family.
To order memorial trees or send flowers to the family in memory of Artie Ann Suposs, please visit our flower store.