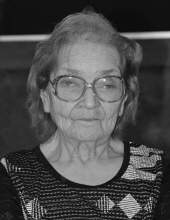 Armilda Ruth Williams
A graveside celebration of life for former Lamar resident currently of Dalhart, Texas Armilda Ruth Williams affectionately known to many as Millie will be held at 11:00AM on Tuesday, July 23, 2019 at the Fairmount Cemetery in the Veteran’s Section with Pastor Rick Calvert officiating. A memorial service for Millie will be held at 11:00AM on Saturday, July 27, 2019 at the Dalhart Church of the Nazarene located at 1102 Keeler Ave. in Dalhart, Texas.

Per Millie’s request there will be no public visitation.

Millie was born on December 3, 1937 in Lamar, Colorado to Wiley and Mary Esther (Hawver) Bowen and passed away on Wednesday, July 17, 2019 at the Coon Memorial Hospital in Dalhart, Texas at the age of 81. Millie was a loving wife, mother, and grandmother to many.

Armilda went to Lamar and Florence Colorado schools. She then went on to work at Lamar Hospital, Cinderella Nursing Home, had a child care in her home and she also helped Lee run the Carpet Shack in Las Animas. After moving to Dalhart, in 1978 she worked at Dallam Hartley Child Development Center, Coon Memorial Hospital, and Mother’s Day Out at Central Methodist.

On July 1, 1953 she married Lloyd Perkins in Raton, New Mexico and to this union they had five children, MaryLou, Louise, Peggy, Patty and Albert. They divorced in 1963. Armilda married Lee Williams on October 26, 1964 in Pueblo, Colorado and to this union they had three children, Velinda, Donna and Darin. In April 2013, they were blessed to find out about Lee’s daughter, Geniel and welcomed her into their lives.

Armilda loved to cook and bake, tri chem paint pictures, reading, play cards, camping, but most of all she loved being around her family and friends.

Armilda is survived by her husband of 51 years, Lee Williams of the family home in Dalhart, TX; children, MaryLou (Jim) Turner of Las Animas, CO, Peggy Thomas of Rocky Ford, CO, Albert (Teri) Perkins of Lamar, CO, Geniel (Darrell) Burke of Greeley, CO, Velinda (Kevin) Matthews of Dalhart, TX, Donna (Keith) McGinnis of Dalhart, TX and Darin (Shelene) Williams of Dumas, TX and her son-in-laws, Rodney Graves and Carol McDowell as well as her 27 grandchildren, 67 great-grandchildren and 6 great-great-grandchildren. She is also survived by her sister, Mary Nielsen of Syracuse, KS and by her brother and sister-in-laws, Kathy Bowen, Charles and Helen Cook, Katherine and Richard Melton, Martha and Bobby Adee, Betty Blades, Wayne and Carol Williams, Kenneth and Bobbie Williams, Loyd (Becky) Williams, and Carl and Helen Williams as well as numerous nieces, nephews, other family and a host of friends.

Memorial contributions may be made to the Dalhart Hospice either direct or in care of the funeral home office.

Services are under the direction of the Peacock Family.
To order memorial trees or send flowers to the family in memory of Armilda "Millie" Ruth Williams, please visit our flower store.