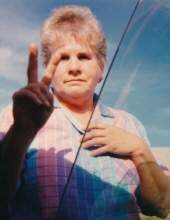 Anna E. McManaway
A celebration of life for longtime Lamar resident, Anna E. McManaway will be held at 1:00PM on Thursday, December 7, 2017 at the Peacock Family Chapel. Interment will follow at the Riverside Cemetery.

Visitation for Anna will be held on Thursday, December 7, 2017 from 9:00AM until time of service at 1:00PM at the Peacock Family Chapel.

Anna was born on April 16, 1939 at Winfield, West Virginia to Wesley and Mary (Taylor) McVay and passed away on December 3, 2017 at her home in Lamar with her family by her side at the age of 78.

Memorial contributions may be made to the Lamar Animal Shelter either direct or in care of the funeral home office.

Services are under the direction of the Peacock Family.
To order memorial trees or send flowers to the family in memory of Anna E. McManaway, please visit our flower store.