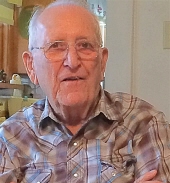 Angelo Passini – 8/3/1927 – 8/9/2016
Angelo passed away peacefully at his home in Lamar, Co. early in the morning of August 9th 2016.
He was born near Granada Co. to Primo and Margaret (Guidotti) Passini.  He was preceded in death by his parents and two sisters Rose Cable and Doreen McKibben.  He is survived by his wife Joyce (Armitage) Passini, two sisters, Lucille Mader of Greeley Co., and Joan Passini of Lamar, Co., four children, Linda (Passini) Lonnberg and husband William (Ted) of Bristol, Co., Cheryl Passini of Lamar, Co., Janet (Passini) Marriott of Hartman Co., and Robert Passini of Ulysses, Ks. Nine Grandchildren, Becky (Lonnberg) Fletcher and husband Neil, Sandy (Lonnberg) Nordyke and husband Mike, Jim Lonnberg and wife Jennifer, Kerri Lonnberg, Christon Gibson, Michael Marriott, Todd Marriott and wife Heidie, Brooke (Passini) Gibbs and husband Michael, and Rily Passini. Angelo is also survived by 17 great grandchildren.
Angelo grew up west of Bristol, Co where he loved to hunt and fish with his friends.  He attended School in Bristol and later in Hartman, Co.  (where it is alleged that he whipped every kid on the playground)  At 17 he joined the U.S. Navy as WWII was coming to a close.  He attended basic in San Francisco and served 1 year where he saw  a portion of the Pacific before he was honorably discharged from service.
Upon returning home he met and married Joyce Armitage in June of 1947.  This year the couple celebrated 69 years together.
Angelo took up farming near Hartman then purchased his own farm and worked it until 1977.  He was well known in the farming community as being a mentor and always offering a helping hand.  After that Angelo worked at the county shop in Holly and was Prowers County Noxious Weed Agent before retiring and moving to Lamar in 1989 where they remained. His latest venture was making “marble boards” for folks who wanted one.
Angelo loved to fish and play cards and when he couldn’t fish anymore he still played cards and held regular card parties with friends.
Angelo met his death as he had done everything in his life.  On his own terms and in his own way.
Memorial services will be held at 2:00 PM Friday, August 19, 2016 at the Peacock Funeral Home.
Memorial contributions may be made to the Lamar Area Hospice either direct or in care of the funeral home office.
To order memorial trees or send flowers to the family in memory of Angelo Passini, please visit our flower store.