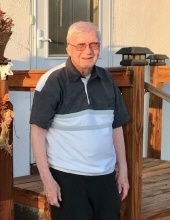 Elton Walter Edwin “Al” Wilson
A private family memorial service for Lamar resident, Elton Walter Edwin Wilson, affectionately known to his family and friends as Al, will be held at a later date.
Per Al’s request cremation will take place and there will be no visitation.
Al was born on November 4, 1928 at Kettle River, Minnesota to Walter Henry and Saima Marie (Maunula) and passed away on November 5, 2020 at his home in Lamar with his family by his side at the age of 92.
He is preceded in death by his parents, son Robert Brown and sisters, Faye Hendrickson and Gladys Marcott.
Al is survived by his wife, Darlene Wilson of the family home in Lamar, children Cheryl (Bryan) Beaudreau of Eagle River, WI, Sue (Sam) Borsellino, Dorleen (John) Pickett all of Cable, WI, Jan Olsen of Tomahawk, WI, Dale (Debbie) Brown of Auburn, KS, Dennis (Lynn) Brown of St. Paul, MN, Debbie (Tim) Dillon of Lamar, Darrell (Jody) Wilson of Thornton, CO and Brenda Wilson of La Salle, CO; twenty-eight grandchildren, forty-eight great-grandchildren and three great-great-grandchildren. He is also survived by his sister, Jane Tracy of Kettle River, MN as well as numerous nieces, nephews, other family and a host of friends.
Memorial contributions may be made to the Lamar Area Hospice either direct or in care of the funeral home office.
Services are under the direction of the Peacock Family.
To order memorial trees or send flowers to the family in memory of Al Wilson, please visit our flower store.