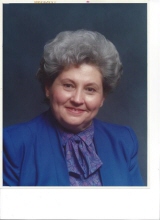 
A Memorial Celebration for longtime Lamar resident, Yvonne Eddleman was held at 10:00 AM, Saturday, July 19, 2014 at the Peacock Family Chapel with Pastor Jeff Alexander of the Lamar Calvary Baptist Church officiating. Interment of the ashes followed at Fairmount Cemetery with Joshua Waltz officiating.
Yvonne Eddleman was born on April 12, 1932 at Alamosa, Colorado to Earl W. and Zeta A. (Beaton) Labertew and departed this life on July 10, 2014 at Salt Lake City, Utah at the age of 82.
She is preceded in death by her husband Dick Eddleman on July 26, 1999 as well as her parents.
Yvonne is survived by her children; Rick (Marilyn) Eddleman of Elko, Nevada, Vickie (Vern) Tague of Lamar, her 8 grandchildren; Brandon Eddleman, Brian Eddleman, Breanne Eddleman, Brad Eddleman, April (Cory) Forgue, Aundrea (Josh) Waltz, Laurie, John Bronniman and Jonathan (Janet) Tague as well as 15 great grandchildren. She is also survived by her beloved sister and brother; Donna (Jerry) Marcove of Santa Barbara, CA and Jim (Tanya) Labertew of Scottsdale, AZ as well as other relatives and many friends.
Memorial Contributions may be made to the charity of one’s choice either direct or in care of the funeral home office.
Arrangements are under the direction of the Peacock Funeral Home.
Online condolences may be made at www.peacockfuneralhome.com.
To order memorial trees or send flowers to the family in memory of Yvonne Eddleman, please visit our flower store.