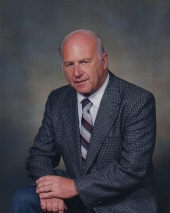 A Celebration of Life for former Lamar resident currently of Simi Valley, California will be held at 10:00AM on Saturday, April 21, 2012 at the Peacock Family Chapel with Mike Lewis of the Cheyenne Wells Christian Church officiating. Interment will follow at the Fairmount Cemetery.

Wayne was born on December 9, 1922 in College View, Nebraska to Dwight and Ella Young and passed away on April 7, 2012 at Simi Valley, California at the age of 89.

Wayne spent his childhood and young adult life in Lincoln, Nebraska.  In 1944 he enlisted in the army and served two years in World War II.  He was awarded several honors including a Purple Heart and Bronze Star for service to his country.  Upon returning to Lincoln, he worked at Cushman Motor Company where he met Maxine Martin.  They married in 1948 and had two daughters, Marilyn and Sharon.

In 1962 the family moved to Lamar, Colorado.  Wayne partnered with his brother and the Romer family to open a John Deere store in Lamar.  Their partnership lasted for 44 years and included several John Deere dealerships across the United States.  Wayne enjoyed his life in Lamar and was even mayor for a short while.

In his free time and during his retirement, Wayne enjoyed reading, playing cards and traveling.  He traveled throughout the world and enjoyed collecting treasures along the way.  He also enjoyed his computer and all of the electronic gadgets he could find.  Wayne loved listening to music and taking pictures of anything and everything.  He even became a snow-bird with a winter home in Sun City, Arizona.

In 2004, Wayne moved to Simi Valley, California to be close to his family.  The entire family enjoyed spending the last several years with their dad and grandfather.  Meals spent together were a wonderful occasion and treasured by Wayne dearly.  As his health began to fail, it was a blessing to have him close to those who loved him.

Wayne is preceded in death by his parents, brother; Bruce Young; and daughter; Sharon Klock.

In lieu of flowers, the family is requesting donations be made to the International Essential Tremor Foundation at essentialtremor.org.
To order memorial trees or send flowers to the family in memory of Wayne Young, please visit our flower store.