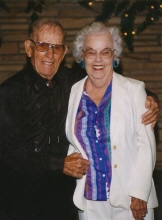 A Private Family Memorial Service for Lamar resident Velma L. Ugolini will be held at Ft. Logan National Cemetery at a later date.
Per Mrs. Ugolini’s request, cremation has taken place and there will be no visitation.
Velma was born on May 6, 1920 at Monument, Colorado to Ora B. and Wilma (Parkhust) Lauth and passed away at Juniper Village in Lamar on December 8, 2012 at the age of 92.
She is preceded in death by her husband Lewis R. Ugolini, son Ron Ugolini and her  parents.
Mrs. Ugolini is survived by her daughter Carol (Tom) Beakley of Lamar, grandchildren; Justen (Diana) Beakley, Rebecca (Robert) Truitt, Kristell (Keith) Stegman and Katie (Kyle) Kurtz all of Lamar. She is also survived by her great grandchildren; Kaitlei, Cody, Brett, Kolby, Alex, Jakob, Ky, Kiwi, Danica and Krypten as well as her sister Jeannie Gist of Pueblo and a nephew Bill (Gerry) Buckner of Littleton.
Memorial contributions may be made to the Veteran’s Section of Fairmount Cemetery in care of the funeral home office.
To order memorial trees or send flowers to the family in memory of Velma Ugolini, please visit our flower store.