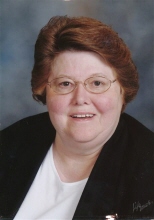 Twila R. Grice
Funeral services for Lamar resident, Twila R. Grice, was held at the Peacock Family Chapel at 10:00 AM on Thursday October 25, 2012 with Reverend Dave Davis of the Lamar First Baptist Church officiating.  Burial followed at the Fairmount Cemetery in Lamar.

Visitation for Twila was held from 1:00 PM to 7:00 PM on Wednesday October 24, 2012 and prior to the service on Thursday at the Peacock Family Chapel in Lamar.

Twila Ruth Grice was born on June 22, 1948 to Chester J. and Oleeta I. (Mendenhall) VanBuskirk in Lamar, Colorado and departed this life at Life Care Center in Greeley, Colorado with her daughter by her side on October 18, 2012 at the age of 64 following a brief illness.  Twila was a life-long resident of Lamar, attended Lamar Schools and upon completion of her schooling; she went to work at the family business – The Model Laundry.  On March 25, 1967 she married Earl Grice.  To this union were born three children, Geniel, Jerrod, and Michael.  In the early 1980’s the family business sold and Twila started a home daycare business.  She continued this business until 2003, when she retired.  This career was really a labor of love for children.  This was truly demonstrated by her tedious care for children, her own, daycare, and foster children.  Twila was a very caring person – the care for the children is just one way of showing her selfless nature; a trait which she exhibited by always putting others ahead of her own needs.  Over the years Earl and Twila cared for a multitude of children and forster children and touched the lives of many.  Twila was devout in her faith and was brought up with strong Christian beliefs.  Twila instilled these beliefs in her family and children.

Twila R. Grice was preceded in death by her parents; by her husband – Earl L. Grice on October 19, 2003; and by one sister and her husband – Debbie and Danny Martinez.


Twila is survived by three children – Geniel and her husband Darrell Burke of Greeley, CO; Jerrod Grice of Texhoma, TX; and Michael and his wife Rachael Grice of Guymon, OK; by six grandchildren – Adam Burke; Joshua Hays; Lacee Burke; Colter Grice; Haeli Grice; and Braydon Grice; by three great grandchildren – Lilli and Leland Burke; and Emalee Hays; by three sisters – Jakie Harmon of Ozark, MO; Esther Rule-Rosengrants and her husband Terry of Springfield, CO; and Rusty and her husband Tom Evins of Whittier, CA; by one brother – Ronnie and his wife Berna VanBuskirk of Greeley, CO; and by two sisters-in-law; Ila and her husband Rob Coffman of Norman, OK and Ruby Grice of Milwaukee, WI, also surviving are numerous other relatives and many friends.

Those desiring may make memorial contributions to the Relay for Life either directly or through the funeral home office.
To order memorial trees or send flowers to the family in memory of Twila R. Grice, please visit our flower store.