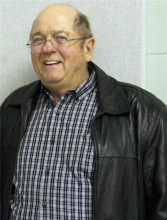 He is preceded in death by his parents, brother; Kenny Buxton and sister-in-law; Loretta “Blondie” Buxton.

Tom is survived by his wife; Dorothy Buxton of the family home in Lamar, children; Mike (Deb) Buxton of Lamar, Pam (Warren) Black of Joplin, MO, Kendra (David) Jacoby of Windsor, CO and Wendy (Greg) Andrade of Lamar. He is also survived by his grandchildren; Andrea (Heath), Tawnie (Chance), Keaton, Kaycee (Justin), Sydnee, Devin, Kylan, Zach, Erik, Skyler, Ethan and Rylan Thomas, great-granddaughter; Hadlee and his brother; Bill Buxton of Lamar as well as numerous cousins, other family and a host of friends.

Memorial contributions may be made to the Hope Center in Lamar, Wiley United Methodist Church and/or Toys for Tots either direct or in care of the funeral home office.
To order memorial trees or send flowers to the family in memory of Tom Buxton, please visit our flower store.