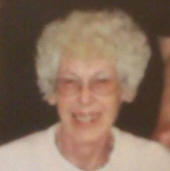 A celebration of life for longtime Lamar resident, Janice S. Spitz, affectionately known to her family and friends as Sue, was held at 2:00PM on Friday, March 20, 2015 at the Peacock Family Chapel with Ian Blacker of the Lamar Christian Church officiating. Interment followed at Fairmount Cemetery.

Sue was born on October 27, 1938 at Hope, Arkansas to Delbert Weice and Geraldine Rhea (McCullough) Nelson and passed away on March 16, 2015 at Prowers Medical Center with her family by her side at the age of 76.

She is preceded in death by her parents and brother; Carl E. Nelson.

Memorial contributions may be made to the charity of one’s choice either direct or in care of the funeral home office.
To order memorial trees or send flowers to the family in memory of Sue Spitz, please visit our flower store.