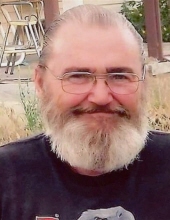 A celebration of life service for Longtime Lamar, Colorado resident, Steve Hoodenpyle, was held at 11:00 AM Thursday December 15, 2016 at the Peacock Family Chapel in Lamar with Pastor Paul Floyd of the High Plains Fellowship Church.  Burial followed in the Riverside Cemetery in Lamar.

Steve was born on March 20, 1950 in Salem, Missouri to Glen and Geraldine Hoodenpyle and departed this life on Saturday December 10, 2016 at his home in Lamar at the age of 66 with his family by his side.

Steve was preceded in death by his father – Glen Hoodenpyle; by one brother – John Hoodenpyle; and a step-son – Craig Ortega.

Those desiring may make memorial contributions to the Lamar Area Hospice either directly or through the funeral home office.
To order memorial trees or send flowers to the family in memory of Steve Hoodenpyle, please visit our flower store.