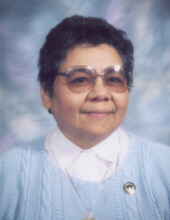 Sister Teresa Orozco, 76, died Dec. 12, 2017, in the Dominican Sisters' convent infirmary, Great Bend. Born Oct. 18, 1941, in Lamar, Colo., Teresa was the daughter of the late Pascual and Josephine Jara Orozco. She entered the Dominican Sisters' Community Aug. 27, 1964, and pronounced her first vows June 13, 1967. She celebrated fifty years of religious life in 2014.
Sister Teresa first worked at the Motherhouse in Great Bend in domestic work before serving as an aide in Saint Catherine Hospital in Garden City, Kansas, where she also attended classes in nursing education at the local community college. Beginning in 1984, she worked in parish ministry and in the office of Mexican-American Affairs for the Diocese of Dodge City in Elkhart KS. Later, at the Motherhouse, she served as a translator for the local Spanish-speaking population and as a part time receptionist.
Sister Teresa is survived by her Dominican Sisters of Peace religious community, and one brother and two sisters, Vincent, Susanna “Candie” Stegman, and Laura Denise Estep, all of Lamar, Colorado. Sister Teresa’s body was brought to the hospitality area of the Dominican Chapel of the Plains, 3600 Broadway, Great Bend, on Wednesday, Dec. 13, 2017, at 4:30 p.m., where it will lied in state until the Mass of Christian Burial at 10:30 a.m. on Friday, Dec. 15, 2017, with Rev. Ted Stoecklein presiding. A wake service was held Thursday, Dec. 14, 2017, at 7 p.m. Burial was in the Sisters' Resurrection Cemetery. Both the wake and the funeral were held at the convent. A memorial Mass for Sister Teresa will be held at 11:00AM on Saturday, January 6, 2018 at the St. Francis de Sales/Our Lady of Guadalupe Catholic Church in Lamar, Colorado with Reverend Mariusz Wirkowski as celebrant.
To order memorial trees or send flowers to the family in memory of Sister Teresa Orozco OP, please visit our flower store.